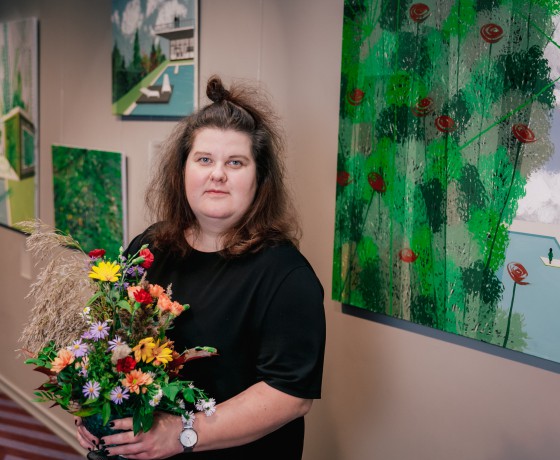 “In my creative work, I have always tried to do paintings as series of stories evolving over the time, which change and complement each other from one exhibition to another, encouraging the most attentive viewers to look for recognizable motifs they have seen before. The exhibition includes paintings from various series of my works that I’ve been working on since 2017,” says artist Sandra Strēle, inviting one and all to visit the gallery.

The Art Academy of Latvia Professor and Vice-Rector Andris Vītoliņš took part in the opening of Sandra Strēle’s solo exhibition, and he describes Sandra as a very determined and goal-oriented young artist: “Sandra Strēle came to my attention as a third-year student when, working on her assignments, she was doing 100% more than her peers. At that time, in order to implement the idea of ​​her work of art, Sandra was ready to travel hundreds of kilometres from Riga to a remote corner of Latvia just to achieve her goal. Over time, her perseverance and efficiency have won important awards at various local and international competitions. This does not mean that Sandra is resting on her laurels. She continues to work persistently, currently, she is studying for her doctorate at the Art Academy of Latvia and preparing for new exhibitions abroad.”

The exhibition features works from the series “MELANCHOLY” (MELANHOLIJA) and “NOSTALGIA” (NOSTALGIJA), which focus on the creation of closed, alienated, sometimes lonely places, their architecture and fictional everyday scenes, offering the viewer the role of an observer. In turn, the series “Exhibitions that Did not Take Place” (Nenotikušās izstādes) focuses on the problems of the artist’s profession by visualizing the ideas of various painting exhibitions and trying to find out what microscopic part of all these ideas are ever realized, and whether they have to be realized at all. This series also reflects on what it means to be a successful artist and what it means to be a female artist.

Sandra Strēle was born in 1991. In 2016, she graduated from the Art Academy of Latvia with a Master's degree in painting, she also spent one semester, as part of a student exchange program, at the Royal Academy of Fine Arts in Antwerp. She has received a visual arts scholarship from the Boris and Inara Teterev Foundation (2012), Brederlo von Sengbusch Art Prize (2014), a SEB Bank scholarship in Painting (2016), prestigious scholarships from The Elizabeth Greenshields Foundation in Canada (2019, 2021), and the Young Painter’s Award (2019). Sandra Strēle has had several solo exhibitions, participated in group exhibitions and artist residencies in Italy, Norway, India, Belgium, Germany, France and elsewhere.

To create a unique collection of works by young Latvian artists, at the end of each exhibition Grand Poet purchases one of the paintings most popular with the visitors, to be included in the hotel’s Grand Poet Art Collection.

“Art has enduring value, and we are really happy to support young Latvian artists who are able to inspire us in this stressful time. Sandra Strēle’s artwork will be a great addition to the hotel’s collection of works by young Latvian artists,” says Grand Poet head Māris Alnis, adding that every visitor to the gallery can vote for his or her favourite work by awarding it a 5 grand sticker. The voting stickers are available at Grand Poet.

On June 14, 2018 the Art Academy of Latvia and Semarah Hotels chain of hotels signed a memorandum of understanding on support for the development of young artists. The objective is to support the academy’s students and young Latvian artists – to encourage them to strive for new achievements, build self-confidence and pursue an international career, provide financial support for talent development, create a space for solo exhibitions, thereby promoting the development of art in Latvia.

Grand Poet hotel was opened by Semarah Hotels, a hotel chain founded in Latvia. At the moment, the hotel chain includes resort hotel Lielupe in Jūrmala and two hotels in Riga: the four-star historic Metropole hotel on Aspazijas Boulevard and the elegant five-star design hotel Grand Poet Hotel at 5/6 Raiņa Boulevard. Each one has its own unique story to tell.

Grand Poet hotel’s Diplohemia concept combines diplomatic and bohemian design solutions developed by the internationally acclaimed and award-winning concept and design agency Stylt Trampoli (Sweden). The hotel was designed by the architectural firm Sarma un Norde (Latvia), preserving the architectural uniqueness of the building. The name of the hotel carries a duality that is often embodied in poets – earnest and bohemian. 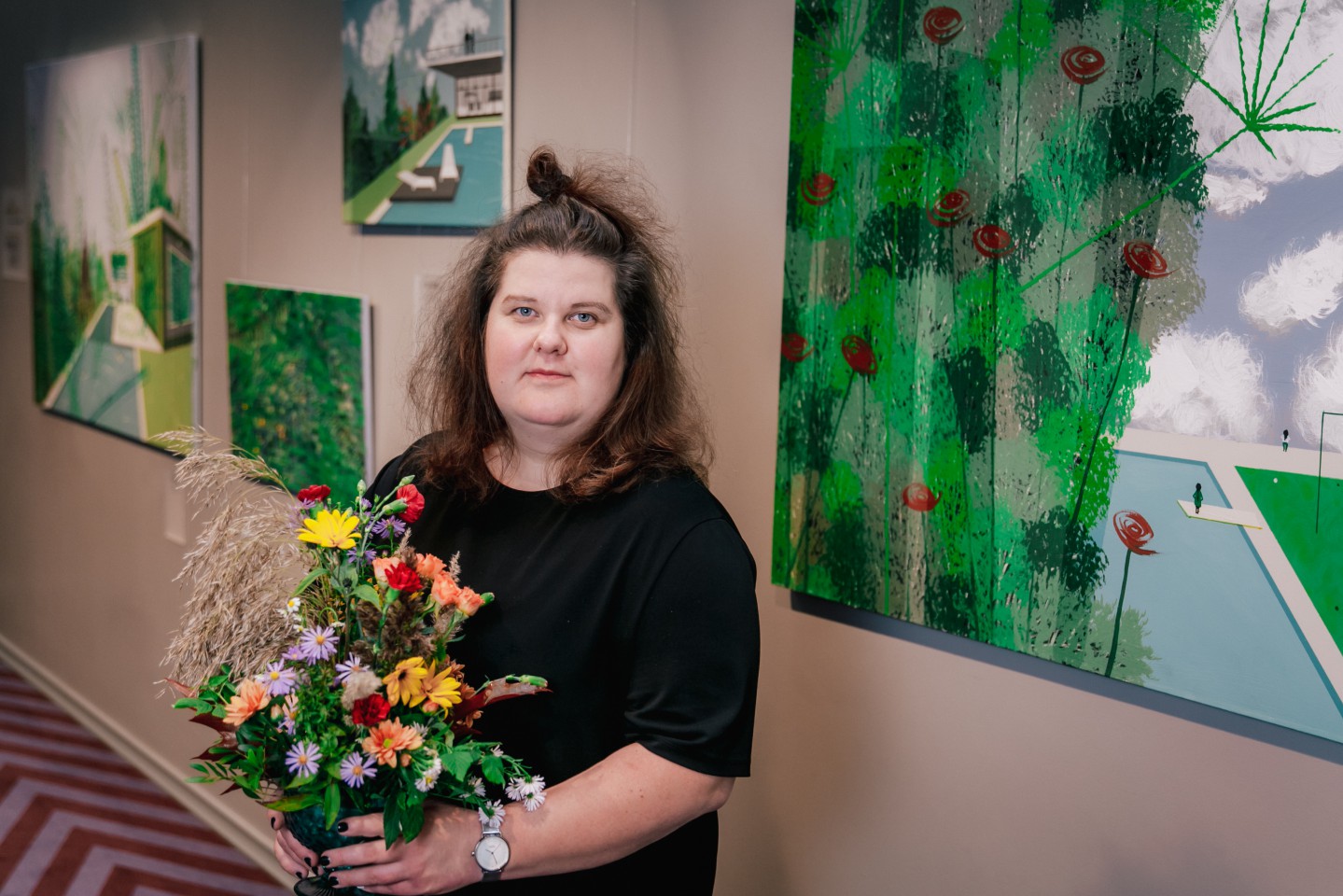 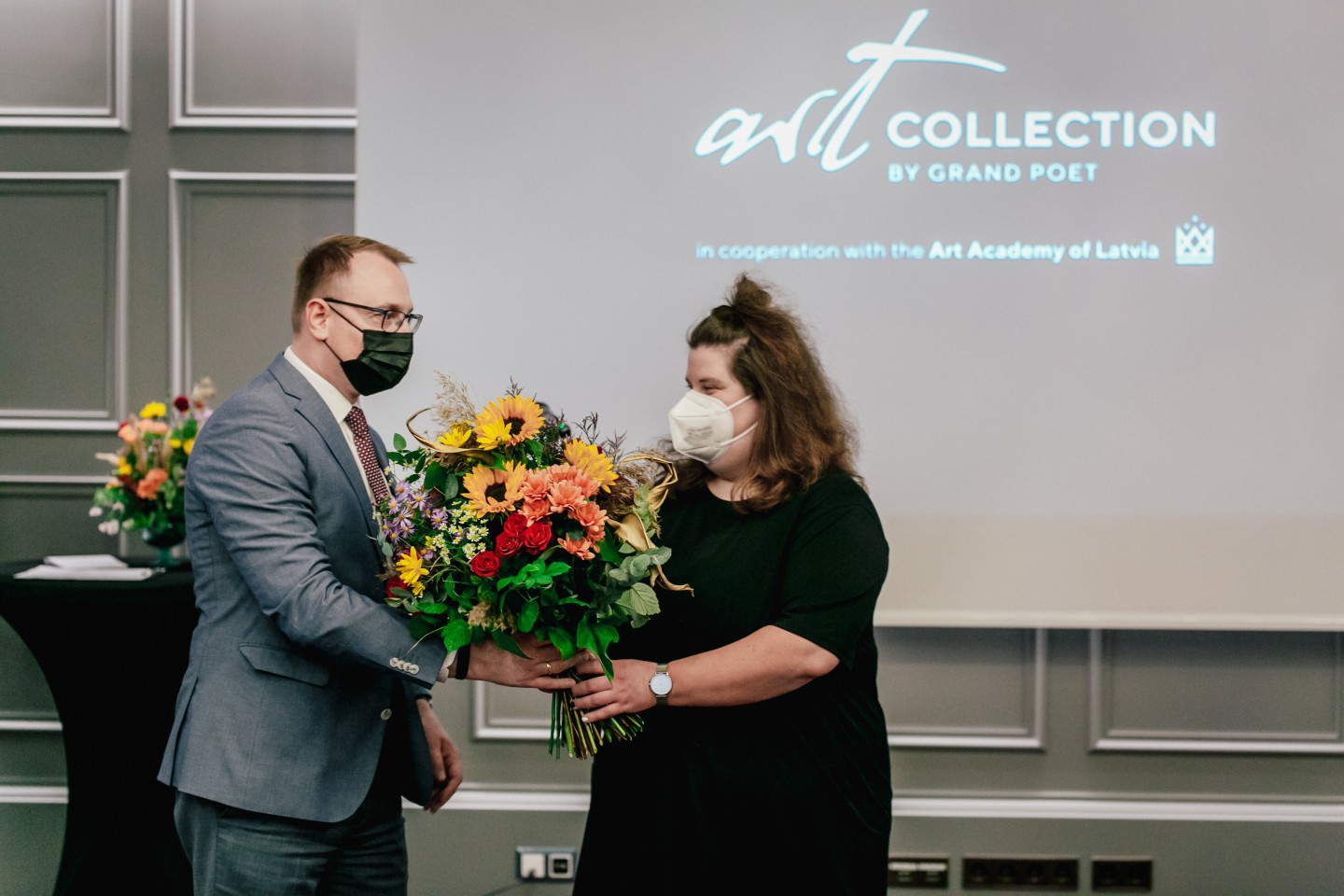 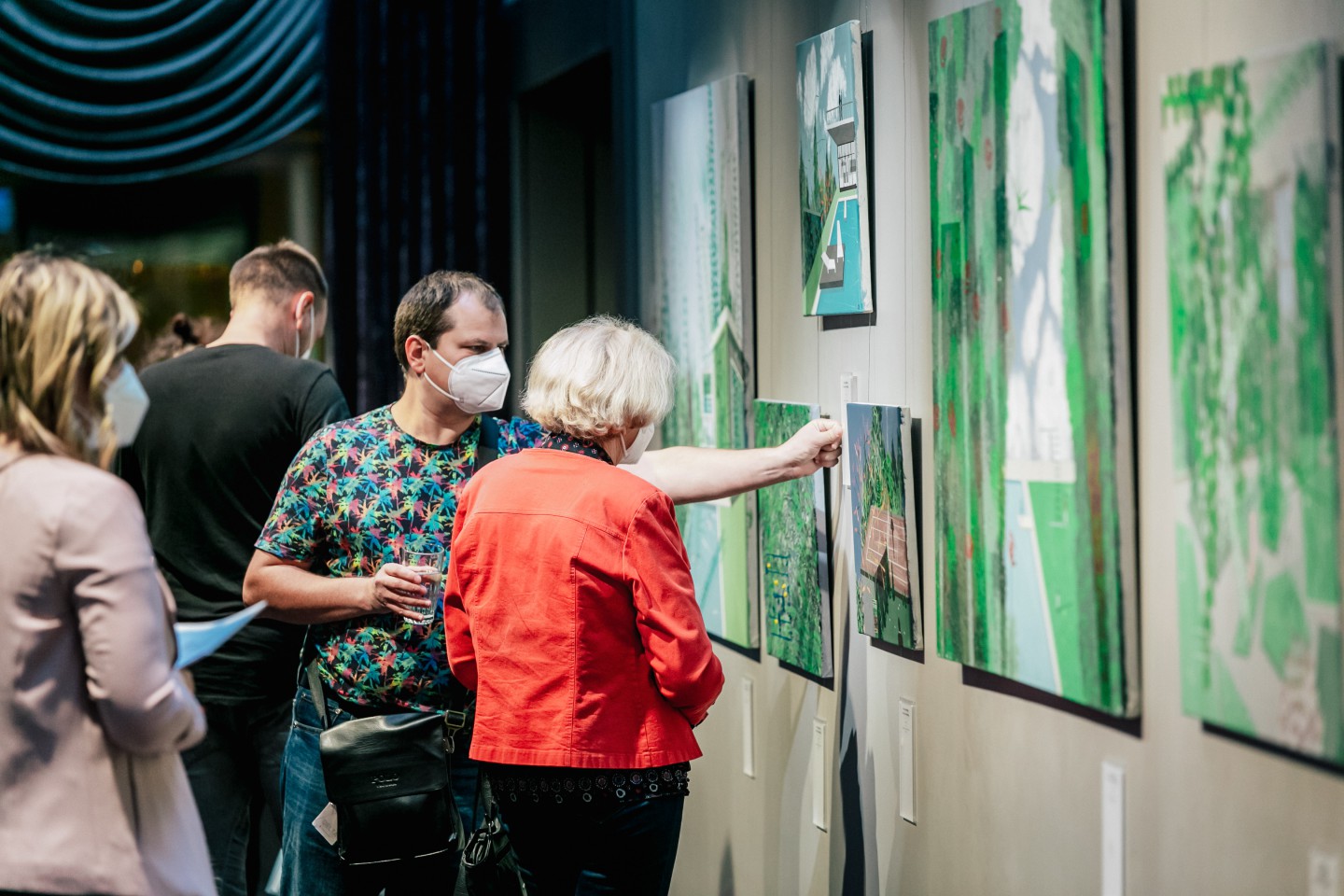 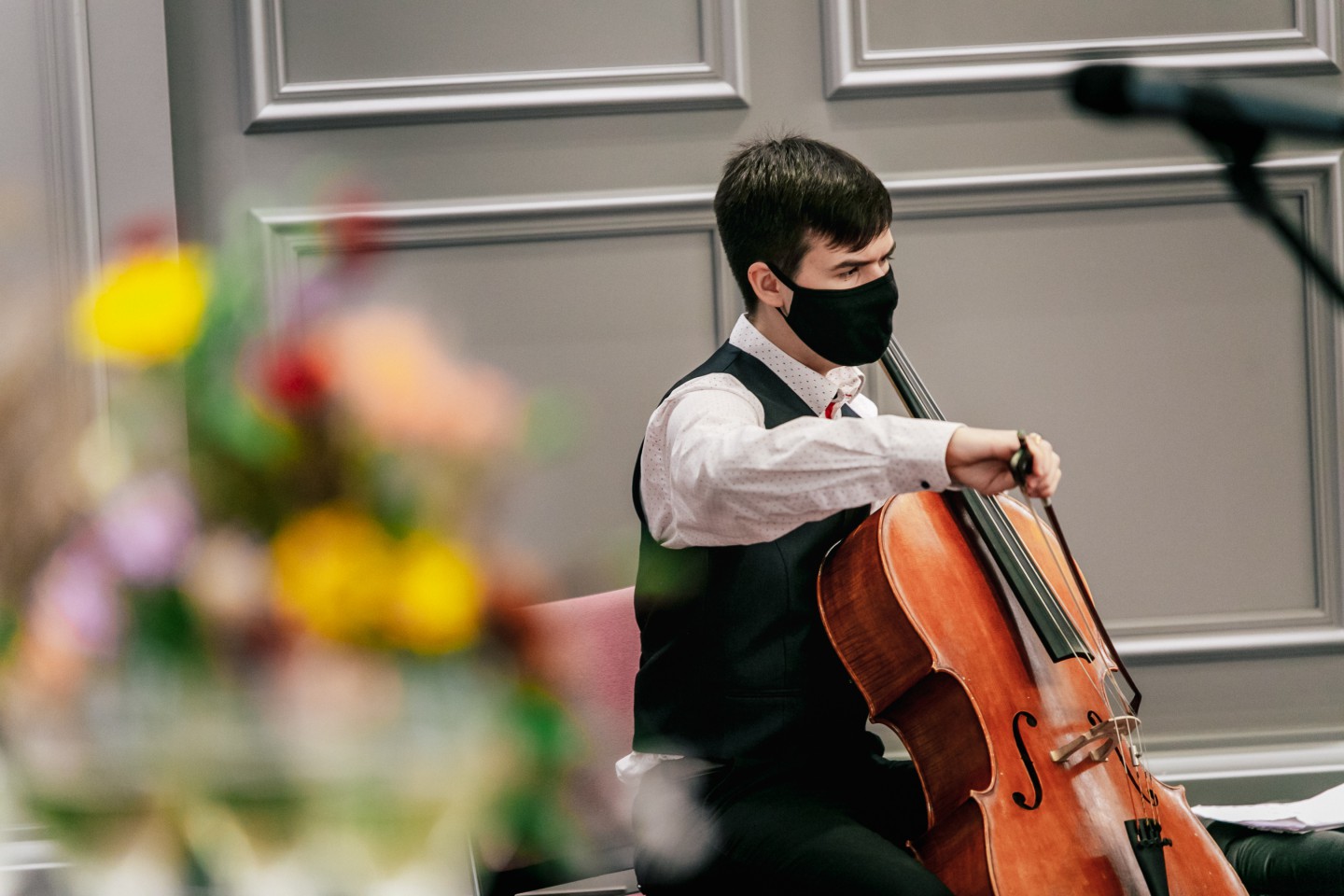 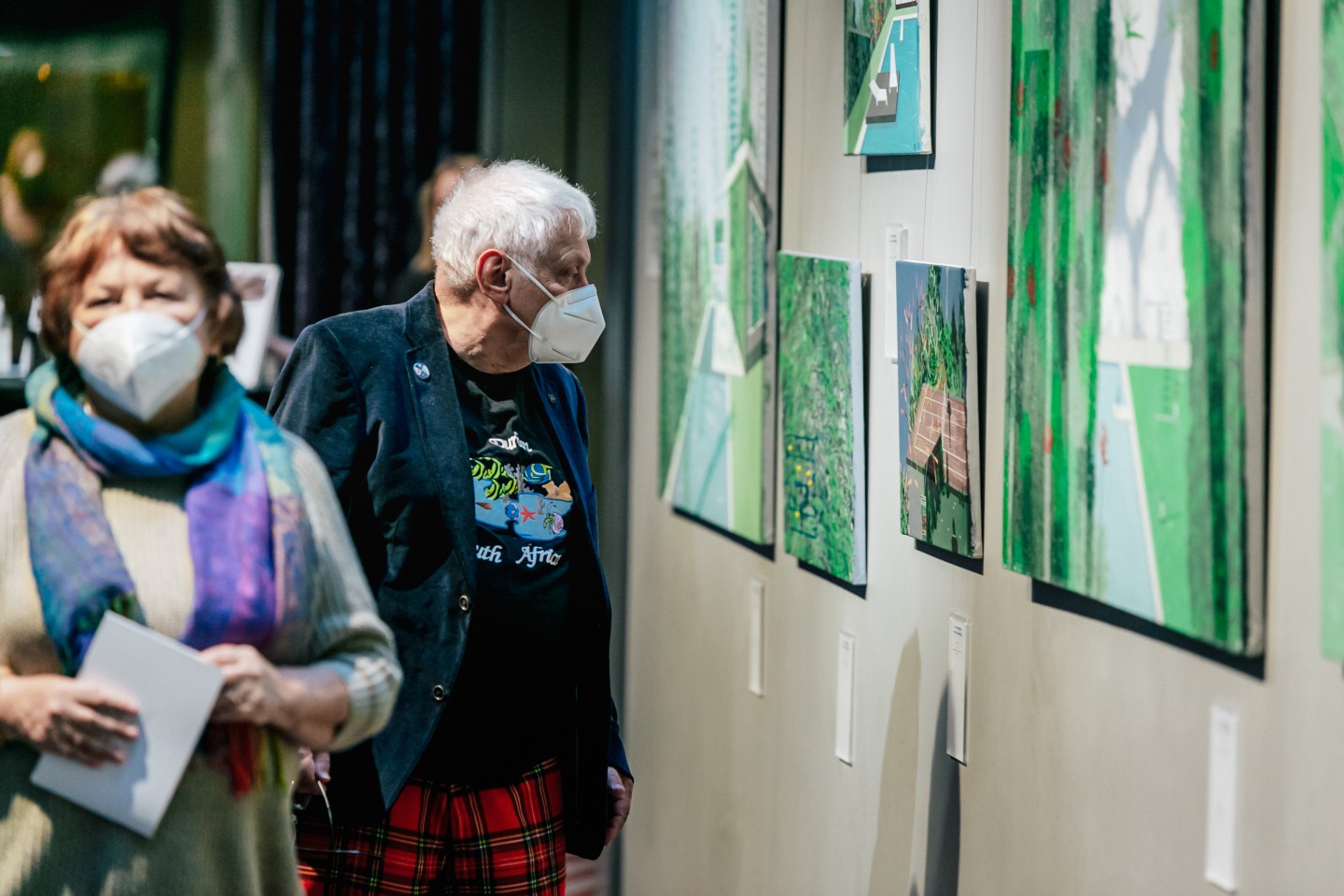 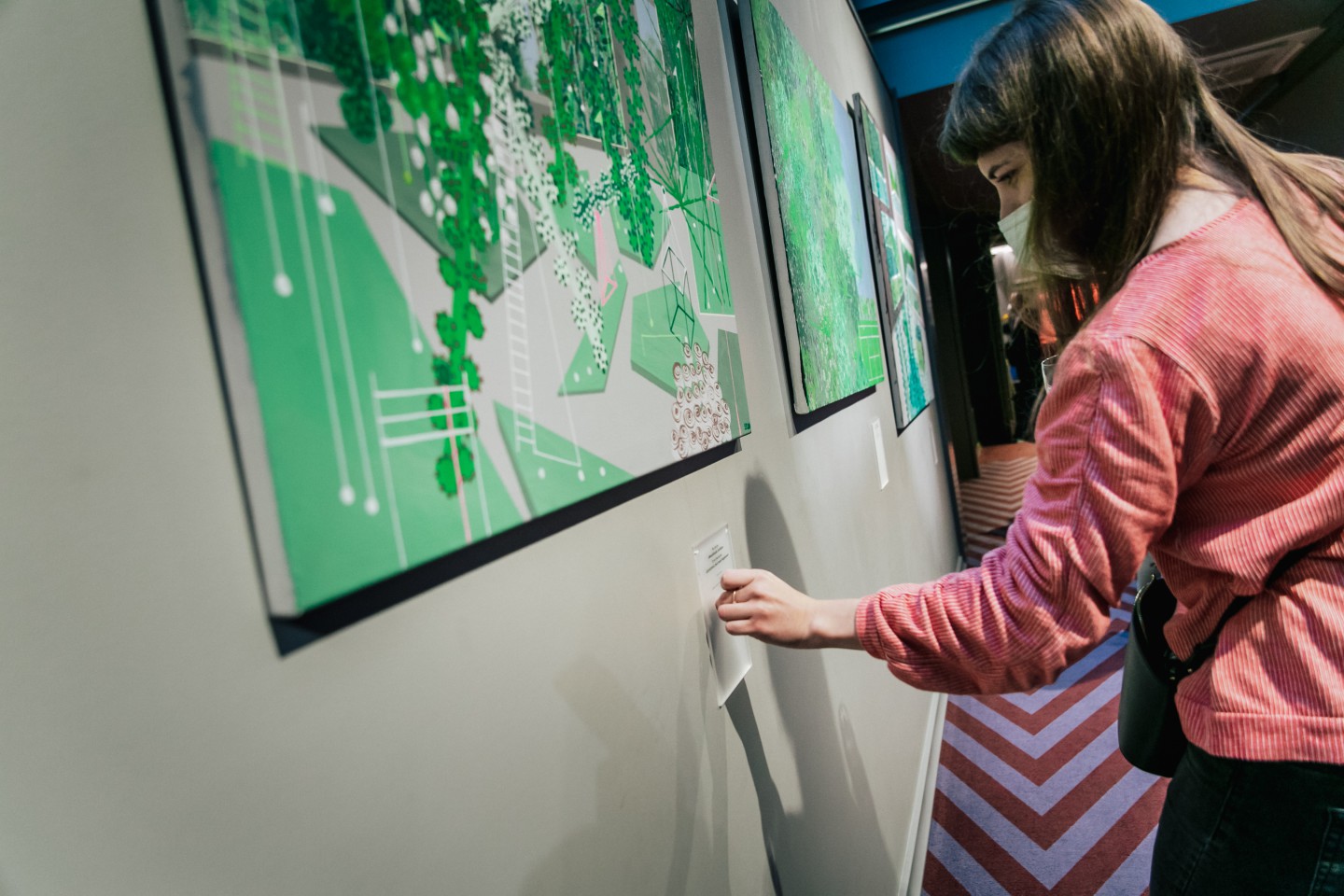 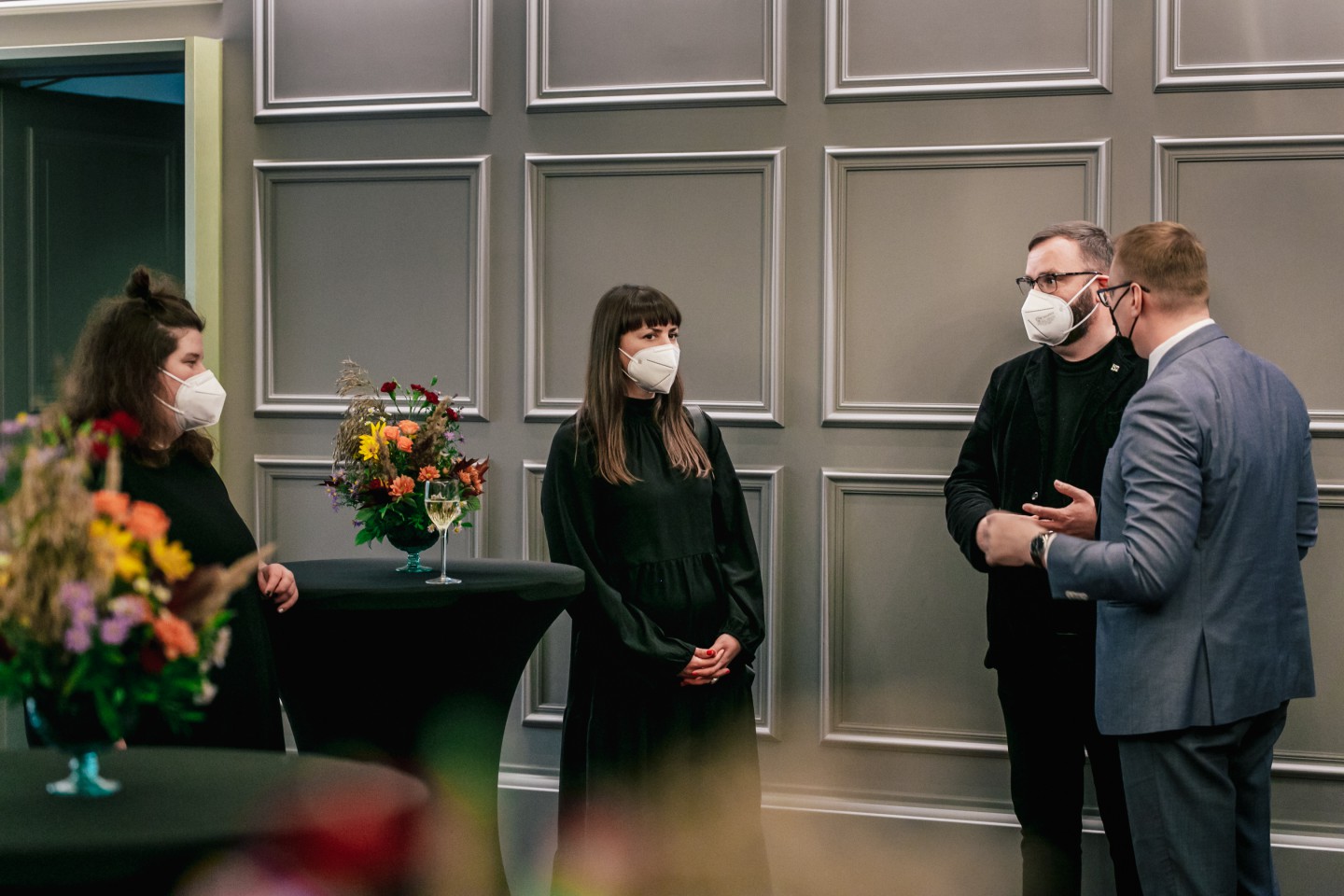 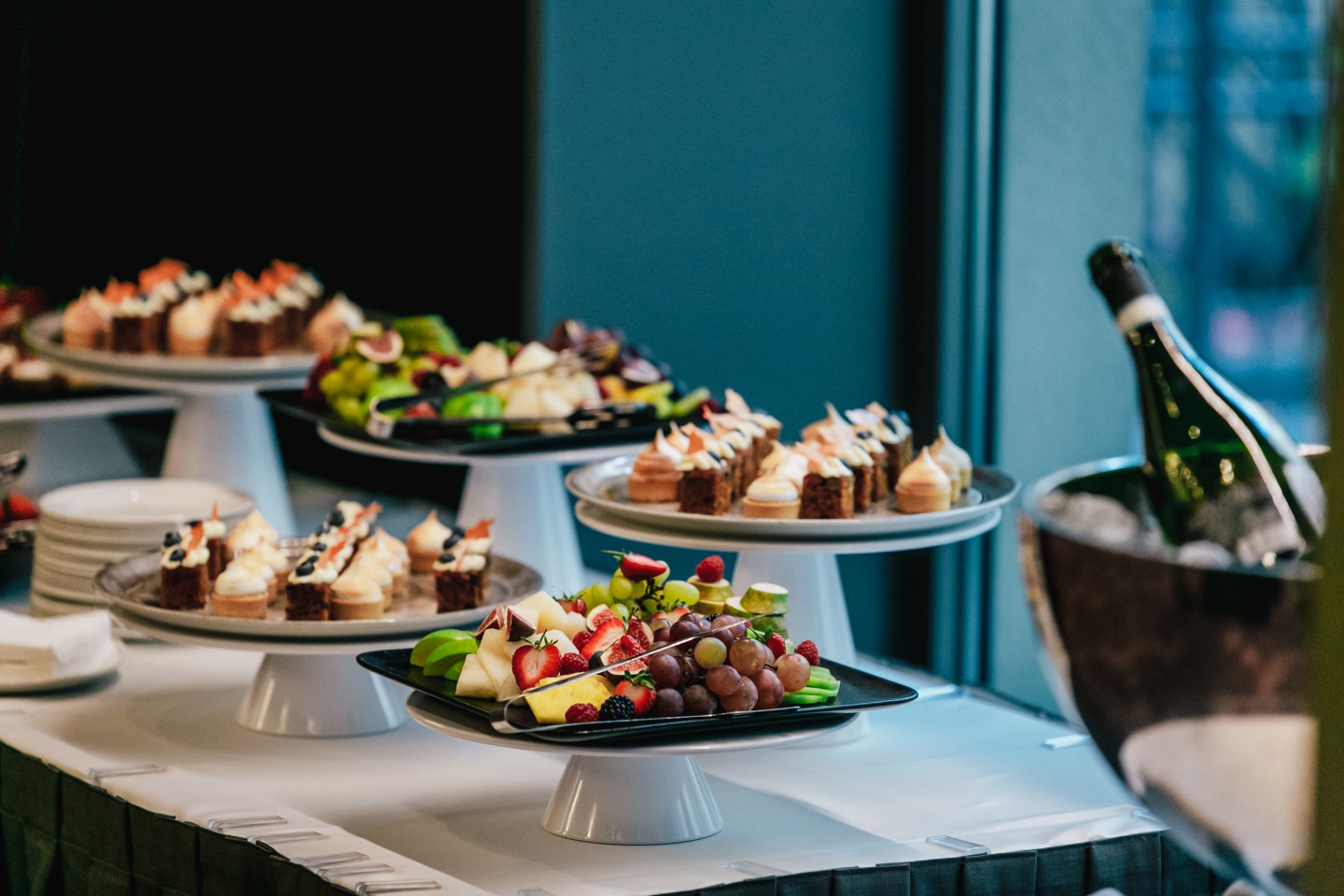 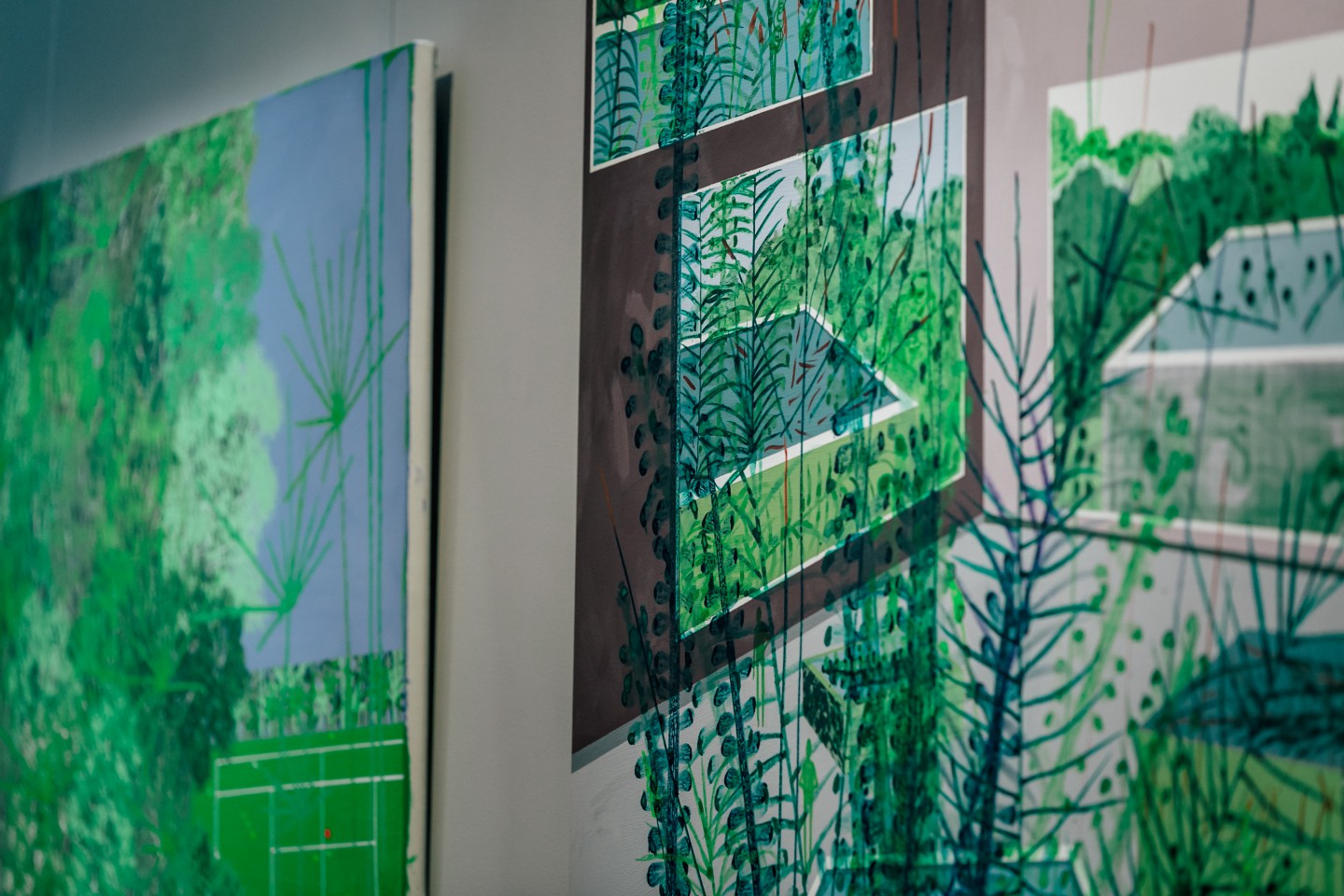 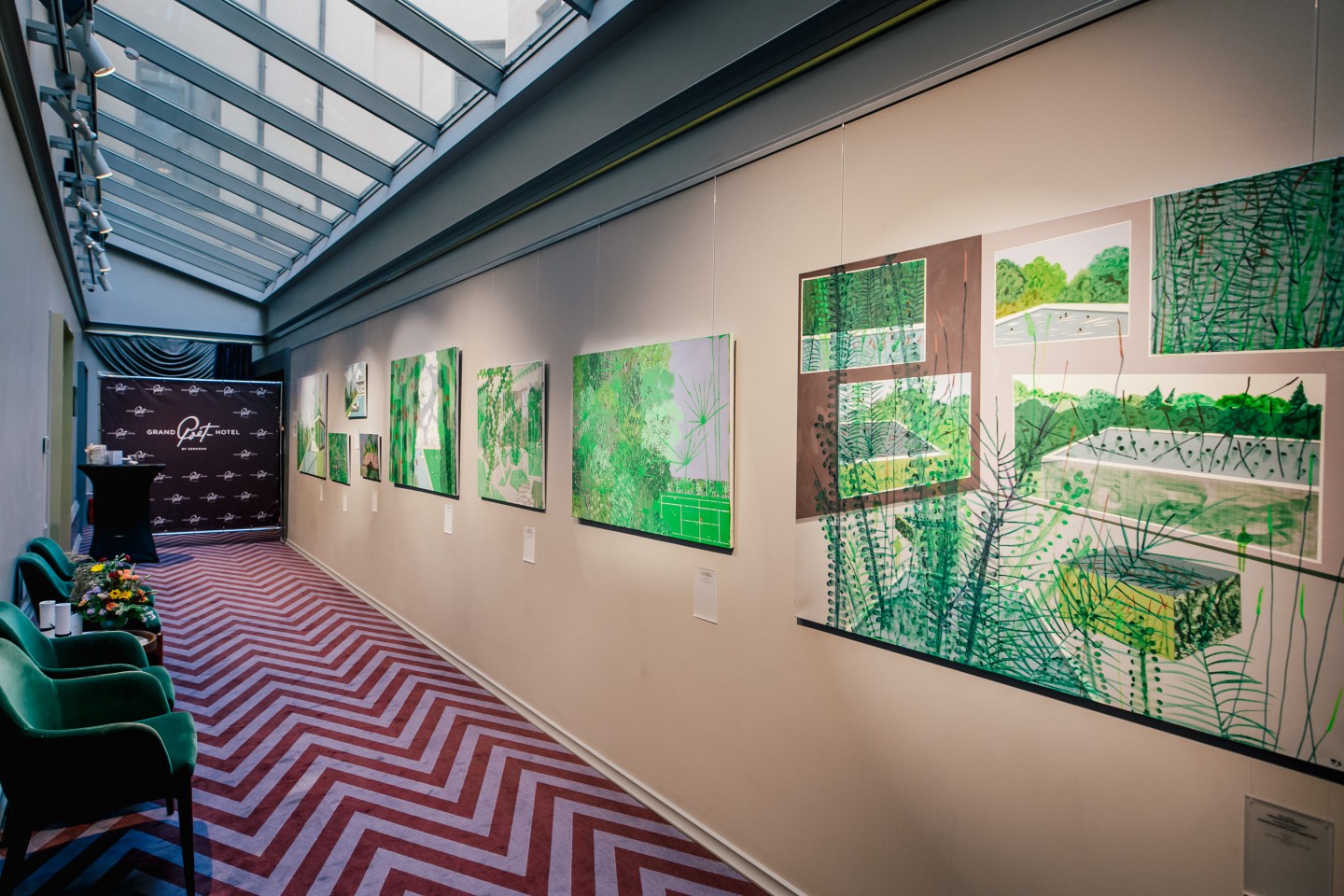