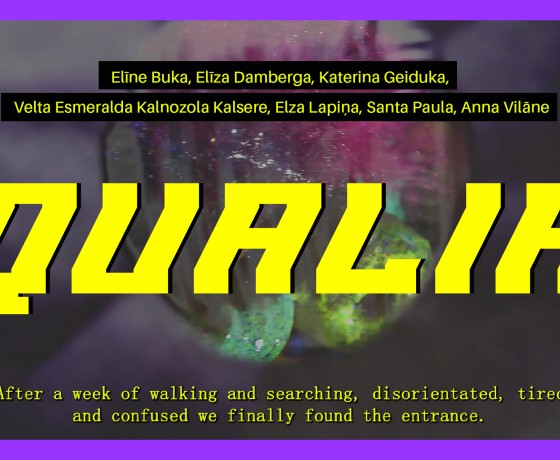 “Qualia” is the result of an experimental project led by guest professor Marc Hulson of Central Saint Martins (University of the Arts London), with seven BA and MA students from LMA participating. The project was developed gradually, over several online and onsite workshops, concentrating on interdisciplinary exhibition practices, experiments in various art media, and a speculative approach to topical issues.

Referring to Jane Bennett’s concept of “object appeal”, the authors of this exhibition have explored the relationship between language, materiality and visual image, combining a fictitious or speculative and descriptive or documentary approach. Bennett’s new materialism, her notion of the appeal of objects outside of their function or expedience and the field of their emotional impact beyond the accepted naming and categorizing systems was the principal starting point of this exhibition.

“During a creative workshop this April at the new LMA location on Kronvalda bulvāris we found an odd archive in one of the abandoned administrative spaces of the former scientific institution. The documents contained within were a series of reports that tried to describe undetermined objects by answering unusual but very particular questions and criteria. No information was found to clarify the context of these documents – their origin and objective are still as mysterious as the objects they refer to,” the organizers of the exhibition explain.

“When we returned to 4 Kronvalda bulvāris in August, renovation work had already started and the filing cabinet had disappeared from the room. We were told the cabinet had been thrown out and its contents burned,” the authors add.

Using imagination and available fragmentary information and referring to a number of related literary and documentary sources, this exhibition is an attempt to reconstruct both the objects and the story behind them. By exchanging and interconnecting the information available new objects, shapes, videos, sounds and images have been generated, composing an incomplete puzzle. Working in pairs and groups, Elīne Buka, Elīza Damberga, Katerina Geiduka, Velta Kalnozola, Elza Lapiņa, Santa Paula and Anna Vilāne have created an exhibition that is a curious guessing game where the task of discovering the missing data is left to the visitor.