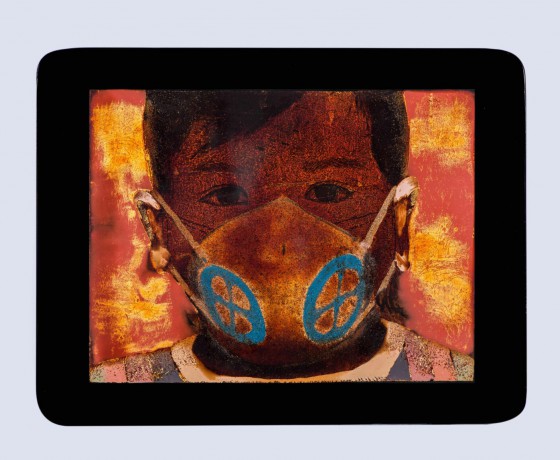 Sơn ta, a resinous substance extracted from the Rhus Succedanea tree native to North Viet Nam, has been collected and processed artisanally since ancient times. Traditionally, the resin was used to cover the wood of everyday objects and of the interior of temples, not just as decoration, but also to protect them from termites and other insects as well as changes in temperature and humidity. Beginning in the 1930s, Sơn Ta was adapted as a fine arts painting medium at the École Supérieure des Beaux Arts de l'Indochine established by the French colonial government.

The first generation of Vietnamese painters of this school pioneered pictorial techniques of lacquer, merging ancient techniques of village crafts with the expressive ideals of French romanticism to create a truly hybrid art form. When this ancient substance known as sơn ta (Vietnamese lacquer) was transformed into the modern tranh sơn mài (lacquer painting) it was joined to a broader genealogy of painting, one that can be described as western and art historical.

Phi Phi Oanh is an independent visual artist who uses Vietnamese sơn ta lacquer as an area of artistic research. He´s interested in the process of acculturation, not only in how lacquer becomes painting, but also in how this process comprises an entire history of representation “becoming” lacquer. This goes beyond the assumption that lacquer merely attained appreciation as an objet d’art and reified into a “canon” of visual styles. My work explores the medium’s ongoing dialogues in the field of painting throughout the 20th century, from modernism to the contemporary period - its ontological search for itself, questioning and expanding into areas such as philosophy, critical theory, identity politics and visual culture. Vietnamese lacquer, thus having become Vietnamese lacquer painting, is now an assembly of meaning with the cognitive faculties to order signs, perspectives, take part in a thought relationship between subject and object, content and representation, as well as attend to the particular will of the individual and his or her relation with the environment.