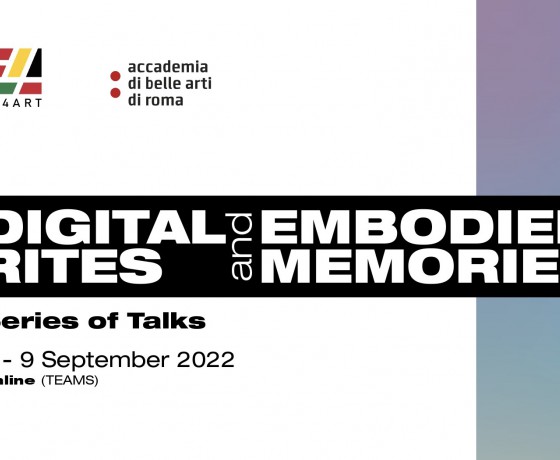 DIGITAL RITES and EMBODIED MEMORIES, EU4ART_differences Doctoral Summer School, will take place in a Monastery in Monte Compatri (Rome) and online, in a series of talks open to the public, from September 6 to September 9.

On those days, a group of researchers from different European capitals will meet in the Monastery to share their individual research in a choral project embedded in forms of rituality contextually divided and symbiotically connected between physical and virtual space.

Within this program, eminent scholars and experts will deliver talks on several interrelated topics that cover subjects such as artificial intelligence in arts and humanities, immersive technologies, gamification, digital currencies, embodied memories and neurosciences.

Webinars are open events. Each talk is followed by Q&A section. Undergraduate students, researchers, and everyone who is interested is welcomed to join.

The morning of 6 September opens the cycle with questions related to artistic enterprise in the light of developments in technology, in particular AI, led by Tom van de Wetering, Program Manager of the Entrepreneurship and talent programme at HKU – Hogeschool voor de Kunsten Utrecht – Expertise Centre for Creative Entrepreneurship. Domenico Quaranta, art critic and curator, expert in digital art, moves into the field of Blockchain, NFTs and art, drawing on 20 years of experience in curating and researching digital art. Enrico Bisenzi, a pioneer of digital telecommunications since the pre-web era and now a professor at the Fine Arts Academy of Rome, will go into the relationship between Artificial Intelligence and copyright, starting from the changing opportunities with the advent of Creative Commons. Adriano Bonafede and Gianluca Cannavale will illustrate Patamu, the start-up that, by generating copyright proofs, makes it possible to publish and share works while protecting one’s creativity.

The day of 7 September will start with the relationship between video games and gamification for cultural heritage with Fabio Viola, one of the world’s most influential designers, who, after having contributed to titles such as Fifa, The Sims, Harry Potter, was recognised with the “Design Lessons” at the Fuorisalone in Milan in 2018. Immediately afterwards, Galit Ariel, a leading techno-futurist in the field of immersive technologies, explores the spatial dimension between the physical and digital world, between here and elsewhere.

The morning of 8 September is dedicated to neuroscience and humanism. Raitis Smits, a pioneering artist in digital arts experiments and founding director of the RIXC Center for New Media Culture (Riga) will project us into the new era of virtual experience, entertainment and storytelling and its impact on education, social policy and codified knowledge. To Vittorio Gallese, neuroscientist and Professor of Psychobiology at the University of Parma with an important role in the discovery of mirror neurons, the difficult task of bringing the audience closer to the Embodied Simulation Theory. Roberto Casati, a distinguished philosopher, professor and member of various research institutes, illustrates how cognitive science intertwines with data consumerism with a body of visual experiments taken from Renaissance art.

On 9 September, the series of talks concludes with “Artificial Intelligence and Art”. Maurice Benayoun, new media pioneer, curator and theorist, investigates thought in motion in the translation of abstractions of the mind, such as human values (love, power, peace, knowledge) into forms of neuro-design, using BrainComputer Interaction (BCI). Marco Mancuso, another eminent scholar in digital art studies, explores dreams and nightmares, utopias and dystopias, freedom, and constraints of the human being from the perspective of its transformation, in the perspective of the post-human and within a trans-disciplinary context between art, design, philosophy and critical theory. Ádám Albert, an artist, educator, and researcher heading the Department of Artistic Anatomy, Drawing and Geometry at the Hungarian Academy of Fine Arts and director of the Art and Art Theory College for Advanced Studies, approaches aspects of production, between digital modelling and generative creation of forms. The INOUT collective, formed by master students from the Fine Arts Academy of Rome, tutored by the artist Cinzia Pietribiasi, presents the first results of the Artificial Research / Artistic Intelligence project that investigates the semanticisation of artificial experiences with machine-learning technologies.

Please find here below the link to the event on EU4ART_differences’, website where you can register for free and download all the related material, including the press release, the flyer with the program, and abstracts and bios of the speakers: https://differences.eu4art.eu/event/digital-rites-and-embodied-memories/ 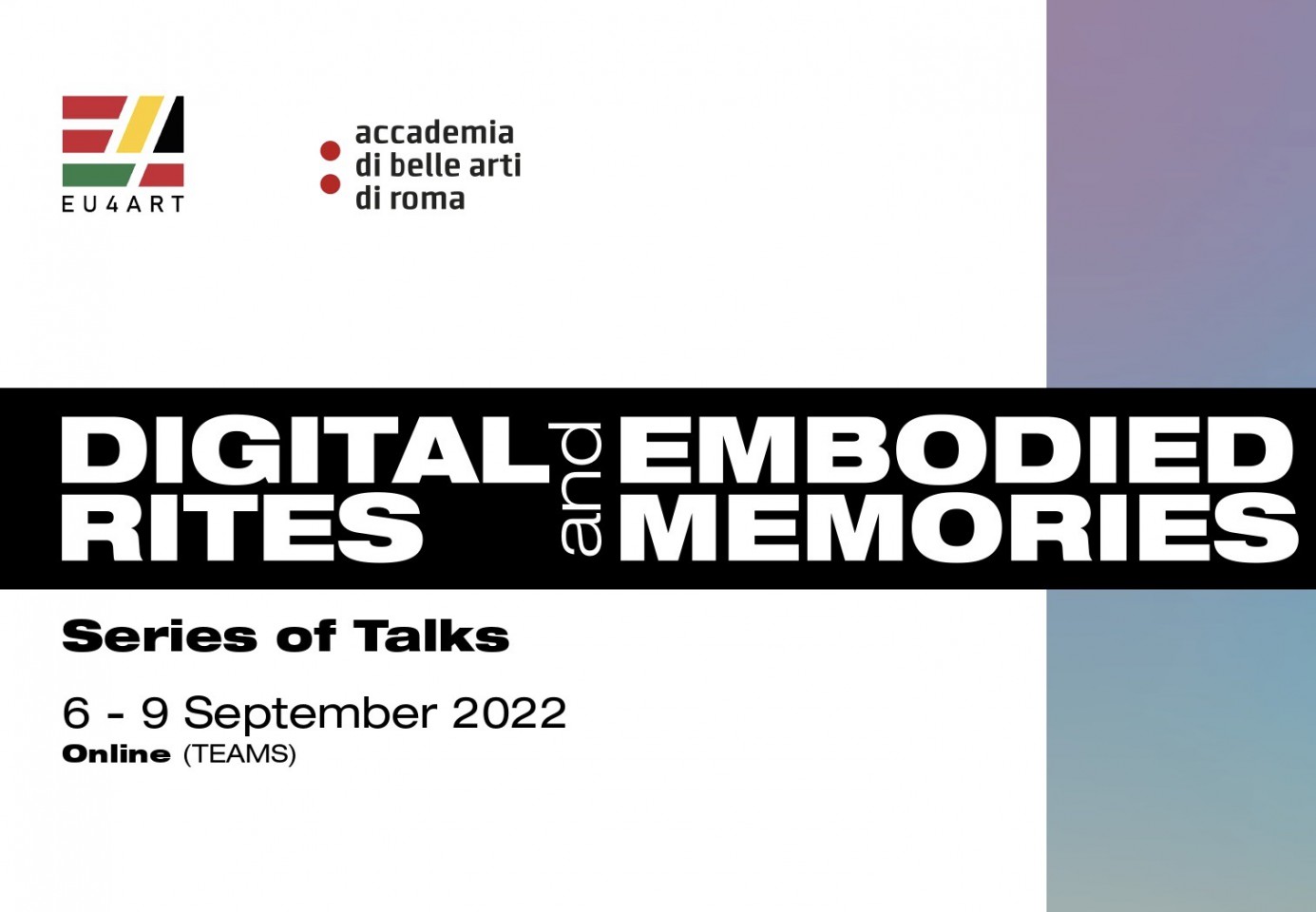